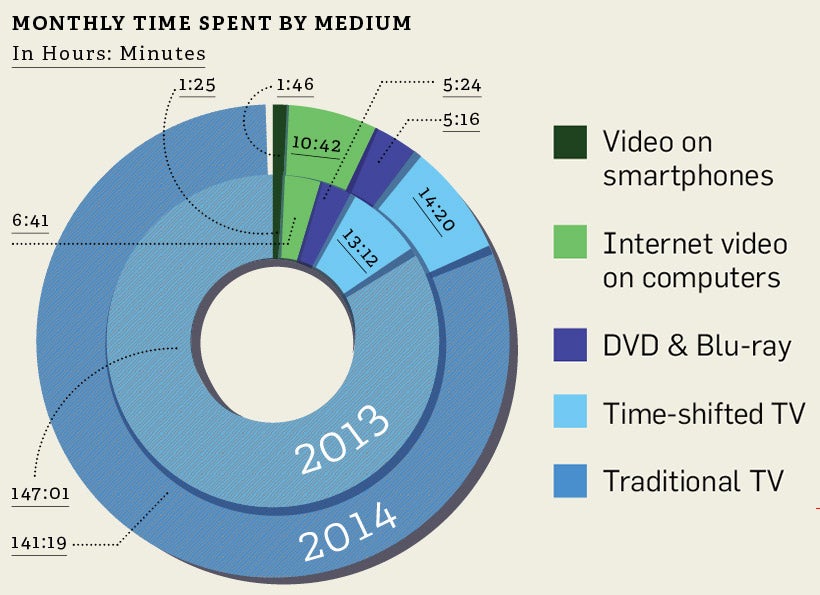 Just a few years ago, watching TV in the United States was relatively straightforward: Choose from a handful of major cable or satellite companies and plug in a TV. Then came Netflix, Hulu Plus, Amazon Prime Instant, and other streaming services, effectively turning smartphones, tablets, and computers into machines for watching TV. The hype, of course, is that these new services will spell the end of cable and broadcasting, but the reality is a little more nuanced and that bodes well for anyone who loves TV.

But first, a few facts: In 2014, the number of American households that depended on a high-speed Internet connection rather than a cable or satellite subscription increased by 112% compared to 2013, according to the firm of Nielsen Audience Studies. So yes, a certain group is broadcasting more. But, the majority of households are actually adding this streaming capability to their more traditional, broadcast and cable TV options. â€œConsumers hate giving up choice,â€ says David Tice, senior vice president of media and entertainment at GfK, another market research firm. Last fall, GfK surveyed owners of streaming media players and found that between 64 and 74 percent still had pay-TV service.

So while the cord cut may not be all it is meant to be, another phenomenon is occurring: Traditional TV and the Internet are becoming interchangeable as both offer more exclusive content on viewers’ schedules. . With more outlets, competition for audiences is all the more intense as the quality of programming increases. Netflix and Amazon have invested in original series, with critically acclaimed results (Orange is the new black and Transparent, respectively). And TV studios are moving their offerings online: HBO’s standalone streaming app is expected this year, and CBS released one last fall.

“Fifteen to twenty years from now, we could get to a point where all the content will be broken up and put on the Internet, and Comcast will charge you twice as much for broadband,” Tice says. But for now, that means couch potatoes have more options than ever before.

This article originally appeared in the March 2015 issue of Popular science.

For the first 20 years of my life, there was always something on hand whenever I needed it. After a stressful day at school or at work, I could lie down on the sofa and it would help me relax in a matter of minutes. Unless the weather was terrible, he was always in my […]